Let me introduce The Sorcerer discovered in 1960 in Ariège, France. He has been regarded as a mythical figure, a shaman, leading a ritual dance. The fact that he directly looks at us as if he is interrupted, is remarkable. Why is he doing that? My method of getting to know him better is through drawing him and paying attention to what I observe during the process of drawing. This I combine with research. I will never be able to see the Sorcerer, thus I fully depend on reference photos and interpretations by the man who set out to show the world all cave painting by sketching, Henri Breuil.

By looking at these two images, a controversy becomes immediately manifest; is Henri Breuil’s drawing a reliable copy or is it his interpretation? This has been hotly debated but I won’t go into this. I trust Jean Clottes who has asserts Breuil’s drawing after having seen the original perhaps over 20 times over many years.

Breuil’s drawing is however problematic, even if it is a truthful copy of the original rock art drawing. I start to draw the Sorcerer, scaling it up in size, working on his head. It is said that the sorcerer isn’t a shaman, it isn’t a human; it is a composite figure bringing together many drawings of Ariège cave. Here we see, the antlers of a stag, the ears of a wolf, the face of a deer, the eyes of an owl, the beard of a bison, the claws of a bear, the pose and the tail of a rearing horse, and the (hind) legs and genitalia of a man.

Drawing Sorcerer’s deer face, I run into trouble with the position of his eyes and ears. The position of the neck in relation to the head and ears is flawed. Equally flawed is the neck of the body in relation to the en-profile position of the face. A face that looks at us over one shoulder would show only one ear, the other would be obscured, visually missing, which is not the case with the Sorcerer. The antlers seem to be incorrectly positioned as well; in case a (horse or human) body is rearing to the front and the head is turned, looking to the viewer full face, then the front antler would seem bigger and the antler more positioned to the back would look a tiny bit smaller, as is not the case with Breuil’s drawing. In fact, the back antler looks bigger! This leads to the conclusion that the head is distorted. Either the painter had this in mind or as cave art is palimpsest art, meaning that painting are re-used, altered and traces of early paintings are often visible in later versions, the compositional flaws could be caused by more than one artists working at this piece of rock art over a long period of time.

The second feeling of unease that I experience whilst drawing the Sorcerer is related to the difference in style and skill regarding the head and the body. The body of the Sorcerer is very well done, technically and anatomically. We see a well proportioned horse body with a waving tail and strong human legs. But what about the head? The bison beard has no movement; the antlers seems to be done by somebody lacking drawing skills. Thus I wonder how this composite head would look like (drawn by me in this case, but I invite you to do the same). Whilst drawing all the animal attributes, I observe that this composite figure has portrayed very well chosen and formidable animal qualities. Is this portrait then an obituary to a beloved and charismatic shaman? ‘He had formidable eyesight like the eyes of an owl’. It is almost as if we hear somebody remembering him during his funeral. ‘He wore antlers of a stag and could hear with the ears of a wolf’. ‘He had such a kind face, like that of a deer’. ‘He had a well groomed beard as one of a bison’. ‘He could run like a horse, but despite his superior qualities, he was just a man’ (hence the human genitalia).

The Sorcerer shape-shifts in many animals, most of them mammals. With the superior eyes of an owl, he perhaps isn’t looking at us, but trying to find his way back, through the dark, to his human body and to his community who has gathered deep inside Ariège cave. A community that thought highly of him and went through huge efforts to make an intriguing portrait of him.

Paula Kuitenbrouwer holds an MA degree in Philosophy (UvA) and is the owner of mindfuldrawing.com. Her pen and pencils are always fighting for her attention nevertheless they are best friends; Paula likes her art to be brainy and her essays to be artistic. 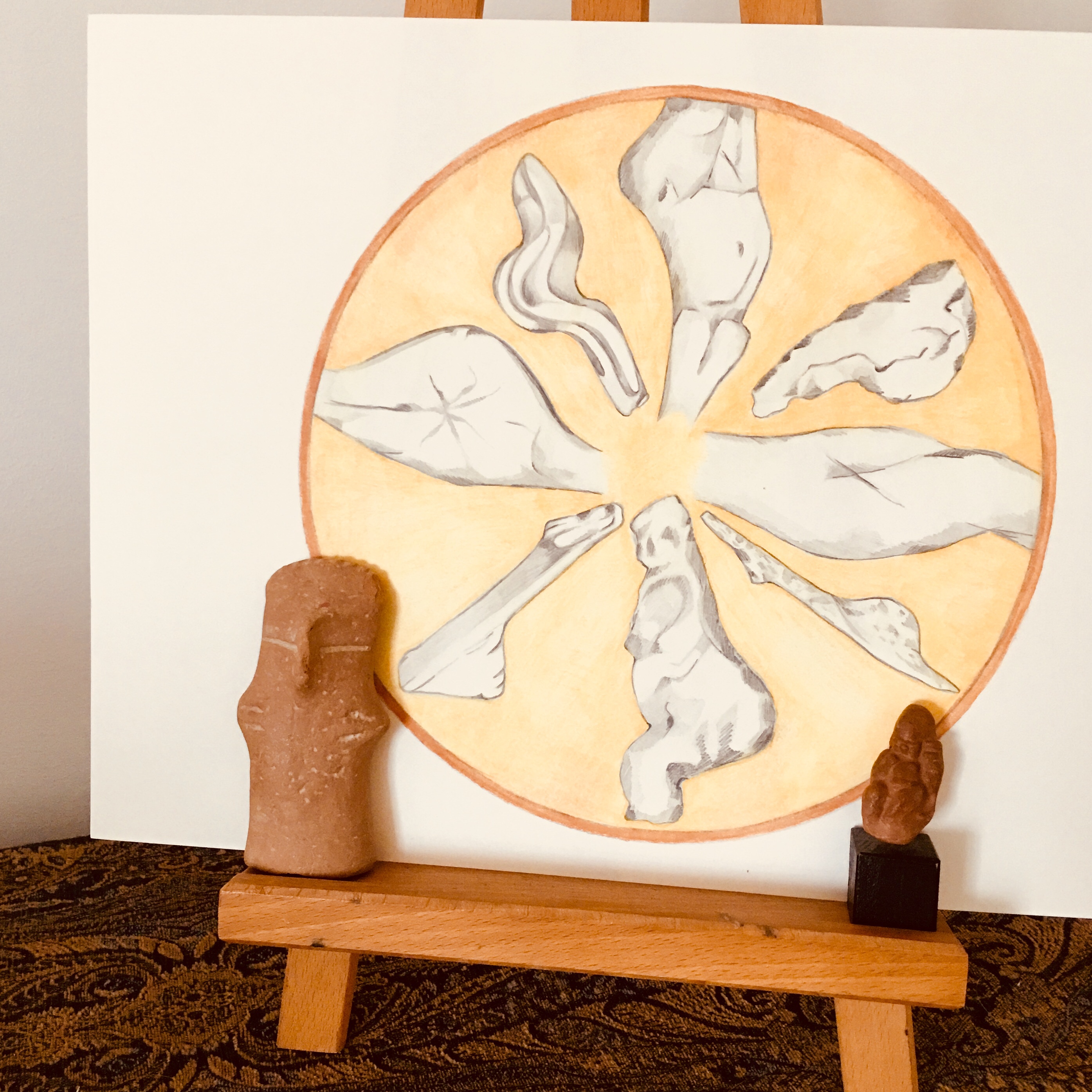 To deepen my understanding of female prehistoric figurines, I have set out to draw a few of them.

Clockwise starting with the middle-lower sitting woman, you find Courbet Venus, carved in a seated position, about 14.900 years old. Followed by the Venus of Polichinelle, carved in green steatite, 27.000 years old, found at Grimaldi. The strictly stylised engraved Lalinde Venus (there are more than one) found in Gönnersdorf in Germany, in Abri Murat and Gare de Couze in France, Pekárna in the Czech Republic, and Wilczyce in Poland. Stone Age. Further clockwise; Venus figures from Wilczyce, followed by another Gönnersdorf figurine. Then, Petersfels Venus that is made of jet, circa 15. 000 BP- 2.000 BP. Another Gönnersdorf engraving and last, Venus from Nebra, 15.000 years old, animal bone.

It makes you wonder, doesn’t it? You can’t possible blame prehistoric peoples for a lack of body diversity. But why the concentration on bellies and buttons, and why are heads and feet missing? Most look either emaciated, nursing or pregnant. Are some suffering from chronic diseases? Did it matter how a female looked like, or was the first piece of bone or stone vaguely resembling and therefore symbolizing a (perhaps departed) woman okay for whatever ritual? Some look crudely abstract, others are enchantingly elegant, as if they are the first sketched outlines of ballerinas in action.

I have chosen an ochre background as this pigment was hugely important to prehistoric peoples. 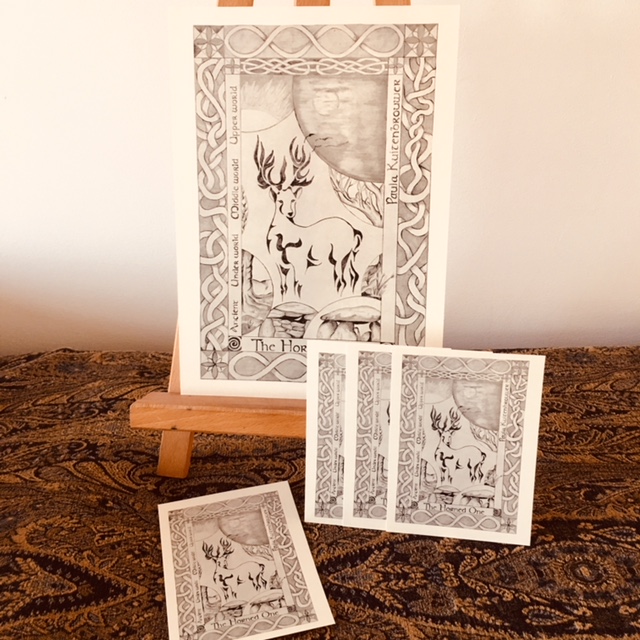 The oldest (Celtic) god is Cernunnos, depicted with the antlers of a stag, seated cross-legged, associated with animals, and holding or wearing a torc (is a large rigid or stiff neck ring in metal, made either as a single piece or from strands twisted together).
Not much is known about Cernunnos but interpretations identify him as a beneficent god of nature, life, or fertility. I find it interesting that Cernunnos is half man, half stag. We clearly like to relate ourselves to such a magnificent animal. It looks well built yet elegant, noble and humble, strong but vulnerable.
I remember driving on Island of Mull and being redirected due to roadworks. As we continued our journey on small roads, all the sudden a huge stag stood in front of us. My husband stopped the car and for a moment we looked in awe to this mighty animal. It looked at us and we looked at him with instant respect, so close and intense was the encounter, that we can still recall the moment, decades later.  It will linger in our memory probably forever. 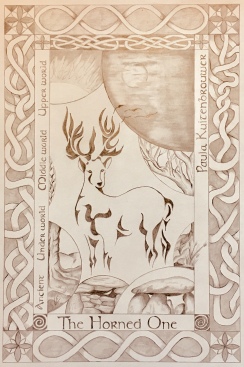 Stag Drawing Antlers shapshifting into birds that fly to the moon. Copyright Paula Kuitenbrouwer
It is therefore that I have drawn stags and deer often. The challenge is always to capture the strength and elegance. Recently, I drew a full stag but I was disappointed because it didn’t stand out. It had not the mightiness that I was looking for. I then applied the ‘Celtic’ method of looking which lines and shadows were essential and which I should leave out. Say 90% of my initial lines were erased and as a result I not only ended up with a more powerful stag, the space that became available allowed me to work on applying beautiful lines and figures (see how the eyes of the stag are also birds). Thus, the stag is complied of many seemingly loose elements, connecting and giving it form.
I placed it in an ancient Upperworld, Middle world, and Underworld. The Upperworld shows the sun and the moon and the antlers of the stag shapeshift into birds that fly away, symbolizing a shamanistic journey to the Upperworld. The Middle world is shown as tree branches and tree trunks. The Underworld can be entered by visiting an ancient burial site, or being close to dolmens, as is the belief of ancient peoples. I knitted all worlds together by using patterned borders.

Artist Info:  I used Derwent Graphite H7 and H3 only, on Winsor & Newton cold press paper. Using only Derwent H pencils gives a drawing very soft tones. Personally, I favour this, but others might judge that it needs more enforcement of darker areas. A few small prints of my drawing show a more enhanced or ‘harder’ version. There are many ‘Celtic’ pattern vectors freely available but I decided to design my own irregular patterns.